As emphasized in a previous post on the gamification of wellness activities, successful gamification is hard. Users of these gamified activities typically don’t acquire the degree of motivation and engagement that gamers exhibit when playing traditional games.

Yu-Kai Chou, an expert in the field of gamification, thinks he knows why. Accord to Chou, gamifiers have over-simplified the human motivational system. More specifically, he points to what he calls the eight “core drives” or features of human motivational systems that explain why good games are successful at keeping players engaged for long periods of time. 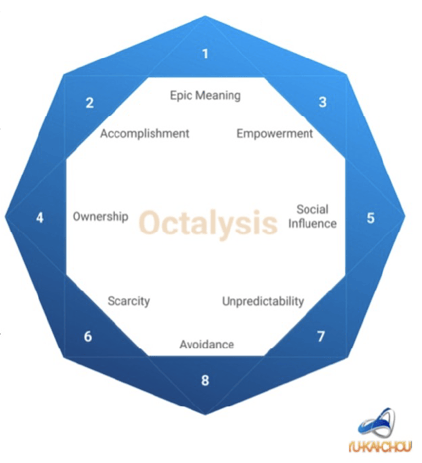 The “Eight Core Drives Of Gamification”

People generally want to feel that they are important or that they are a part of something important. Games provide players with the ability to satisfy this desire in ways that wouldn’t otherwise be possible. They can provide users with the simulated experience of saving middle earth from dragons or of rebuilding civilization in another galaxy. By allowing individuals to have the pretend experience of playing such significant roles, games keep players happy and coming back for more.

Yu-Kai Chou describes this feature of human motivational systems as “the internal drive of making progress, developing skills, and eventually overcoming challenges.” Essentially, this core drive involves the desire to improve yourself and accomplish your goals through hard work.

Games make use of this core drive in a variety of ways. Most commonly, they contain rewards, badges, progress bars, and leaderboards. These can serve as indications to the players that they are making progress and improving. However, Chou notes that successful games are careful to ensure that these indications of accomplishments are only handed out after a genuine challenge, “as a badge or trophy without a challenge is not meaningful at all” and not likely to keep a player engaged.

Chou notes that when individuals feel that they own something, they often “want to improve it, protect it, and get more of it.” This drive is behind the behavior of various kinds of collectors (e.g., stamp, coin, and action figure collectors) as they look for the next addition to their collections. Chou postulates that this feature of our motivational systems can be found in all people to some degree, and that it is partially responsible for the degree of engagement that good games are able to cultivate in players.

One of the more popular ways that games create a sense of ownership is by allowing players to design their in-game avatars. By crafting the character they will be using throughout the game, players tend to feel that the avatars are “theirs” and are more engaged with the game as a result.

It is often difficult to lose what you once had, especially when you invested a lot of time and energy into obtaining it. Games like Farmville trigger this drive by forcing players to continuously come back within a relatively short time frame to ensure that the progress that they have made with their virtual crops is not lost. In other games, players must “stay alive” to advance. These gamers are constantly working to avoid an in-game death, which may result in hours of lost progress.

In some cases, individuals are prone to want something more the less they think it’s available or the longer they think they’ll need to wait to have it. As a result of this motivational tendency, companies are able to charge higher prices for the same products when availability is low. Games utilize this feature of our motivational systems by making artificially scarce the rescores that are needed to make progress in a game (e.g., health boosts, credits, and other in-game valuables). This leads players to want these resources more and to spend more time playing in search of them.

One of the things that the pandemic has made clear to many is how heavily they depend on the ability to interact with others in order to feel well. According to Chou, this is due, at least in part, to the core drive of social influence and relatedness. This drive or set of drives covers all of the desires people have involving their relations to other people, which include the desire for things like “mentorship, acceptance, social responses, companionship, as well as competition and envy.” The advent of online gaming has allowed game developers to tap into this drive by creating virtual spaces where gamers can satisfy this desire in a virtual setting.

According to Chou, the drive of unpredictability and curiosity “is the main force behind our infatuation with experiences that are uncertain and involve chance.” This “infatuation” can be seen in full force at casinos full of gamblers glued to games with highly unpredictable outcomes. It can also be viewed in more everyday circumstances, like when your friend has to watch the next episode of their favorite drama because the last episode ended with a major cliffhanger. “Mystery boxes,” which give players an unknown reward for completing a desired action, are one of the more common ways in which contemporary games take advantage of this core drive.

Finally, there is general desire to create things and see the fruits of your labor. Games are only just beginning to tap into this drive. Perhaps the most notable example of this is included in a game called Minecraft, which places users in a world full of blocks made of different raw materials that players can extract, and craft into tools, items, and structures. Sales of Minecraft recently topped over 200 million, suggesting that this final core drive may be particularly powerful.

While it is difficult to determine what all of this means for the gamification of wellness activities, what is clear is that future attempts will need to deal with the complexity of human motivational systems. Rewards, badges, leaderboards, etc. often haven’t been enough and Yu-Kai Chou has made it clear why.

Other Articles In "Wellness Rewards and Incentives”

Gamified Fitness: A Fad Or The Future?

Though there are many effective wellness promoting activities and behaviors, reaping and keeping...

Pulse Check: A Crash Course In The Taxability Of Wellness Incentives

Many employers offer incentives to their employees to encourage them to engage in wellness...

Salary is, understandably, one of the most important factors employees look at when applying for a...

Health and well-being is something individuals must improve upon 24/7/365. As such, successful...

In our podcast, we talked about how wellness programs are becoming a must-have, as more and more...

Rewarding participation is an excellent way to encourage wellness program engagement.  However,...

As the talent wars endure, companies continue to up their game as it relates to overall perks and...