Productivity is often recognized by businesses as a key organizational metric. Despite the widespread emphasis on productivity and the sometimes misguided approaches taken to optimize it (e.g., Amazon’s productivity quotas, which have provoked legal backlash from policymakers in California), a crucial factor of productivity often goes unrecognized. More specifically, communicatory habits or norms (e.g., norms for when to contact a colleague, how to contact them, when to respond to or temporarily ignore alerts, etc.) have yet to receive adequate attention for the ways in which they frequently fail to be optimized for productivity or how they can be altered to improve it.

To help organizations understand the importance of communication norms or habits and put this knowledge to good use, this post highlights the ways in which maladaptive norms of communication can create productivity sinkholes and discusses examples of productivity interventions that optimize communicatory habits in the workplace.

Increased Interruptions
The move to an all-virtual format during the pandemic came with an increase in unwanted digital interruptions. According to a report by the Harvard Business Review (HBR), since the pandemic began, voice and video call times have doubled and weekly instant message traffic has increased by 65%. Moreover, a recent survey found that 89% of respondents indicated that daily work tasks such as wading through an inbox of unopened emails or managing incoming Slack or Teams messages is one of the most unpleasant parts of their job. Sixty-six percent of participants stated that they have considered leaving their job because of the time spent in meetings, the volume of emails, or Slack/Teams overload.

These interruptions are not only unwanted, they are also bad for productivity. Even when an employee avoids checking an alert, the mere act of noticing it may have already broken their concentration. Checking and responding to alerts makes regaining one’s focus that much harder. This is due to a phenomenon known as cognitive switching (i.e., the process that occurs when one redirects their attention from one task to another). Cognitive switching can require a considerable amount of time and mental energy. As a result, an employee who comes back to an old task after abruptly pausing to work on another is unlikely to approach it with the same degree of concentration, attention, and effort as they would have had they not engaged in two rounds of cognitive redirection.

After Hours Communications
Because remote work has blurred the line that marks the end of the workday, excessive communications aren’t just interrupting employees from completing projects during normal work hours, they are preventing other colleagues from successfully reinstating a boundary between work and home life by tempting them to check and engage with after-hours messages.

Initially, it may seem that having employees work for more hours would lead to more work getting done over time and therefore, greater productivity. However, this is not what typically happens. As employees continue to work extra hours and further degrade the boundary between being “on” and “off”, they may lose the sense that they are entitled to check out at the end of the day. Eventually, they are likely to experience burnout, which is well known for its detrimental effects on health, wellness, and productivity.

Standard productivity interventions (e.g., time management training courses that teach employees about methods like the Pomodoro Technique or the Eisenhower Matrix) tacitly assume that employees work in isolation. Ultimately, this means that these measures fail to consider the degree to which employee productivity can be (and frequently is) impacted by maladaptive organizational norms of communication.

Companies are beginning to develop more effective interventions that work at the systems level and take into account the fact that organizations require effective communication norms. One such example is discussed below. 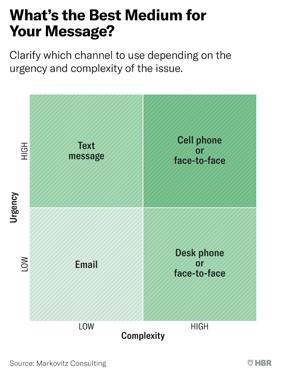 When Gotham City police need Batman’s help, they project an image of a bat into the sky. Because the use of this symbol is reserved for times of crisis, Batman knows that when he sees it, he needs to respond.

Daniel Markovitz, President of Markovitz Consulting noted in his HBR article on systems-level solutions to productivity, that one of his previous employers implemented a simple communications protocol to create a de facto bat signal. The protocol allowed employees to determine the appropriate medium of communication-based on the urgency and complexity of the information they need to communicate.

Though not as clear cut as the bat signal, this system allowed employees to assess the importance of incoming communications, thereby enabling them to “focus on work requiring deep, uninterrupted thought, secure in the knowledge that they only needed to pay attention to text messages or phone calls.”

Education Benefits: Underutilization And Ways To Make Them More Impactful