Digital health companies like Fitbit often tout 10,000 steps as the magic daily number needed to achieve various health benefits from increased energy to lowered risk of heart disease. However, this general guideline has its origins in an unreliable source.

After the 1964 Tokyo Olympics, the local population became increasingly interested in fitness and maintaining their physical health. This inspired a clockmaker to repurpose his skills to create a pedometer. To help his product sell, he gave it a clever and memorable name that, when written out, resembled a walking person. It also happened to translate to “10,000 steps meter.” With that, the 10,000 step maxim was born.

What The Science Says

Several studies suggest that when it comes to physical health, benefits can be achieved with far fewer than 10,000 daily steps. A 2019 study conducted by Dr. I-Min Lee, a professor of epidemiology at the Harvard T.H. Chan School of Public Health, found that among women in their 70s, risk of premature death was reduced with as few as 4,400 steps per day. Other research found that risk of diabetes can be decreased with as few as 2,000 steps per day. Benefits of step counts on cancer risks begin to emerge in this range as well, though the most prominent effects occur with much higher step counts.

The conversation surrounding the number of steps individuals should take in a day to be healthy has largely revolved around the effects of additional steps on physical health. This overlooks an import set of benefits, namely the positive impacts of walking on mental health. One study found that as few as 3,500 steps was associated with a 17% decrease in depressive symptoms in adults 65 and older. Other research found that subjects who participated in a 100-day, 10,000 step challenge improved their stress levels by 8.9%, signs of depression by 7.6%, and anxiety by 5.0% from baseline. Moreover, they found that these benefits were acquired regardless of whether participants consistently fell short of their 10,000-step goal.

Between 4,500 and 8,000 steps, all the above-mentioned health outcomes continue to improve. Researchers note that at around 4,500 steps per day, the association between daily step count and diabetes is the strongest. Compared to 3,500 steps per day, 7,000 steps result in a 30% greater decrease in depressive symptoms on average. Cancer mortality rates continue to decrease through this range as well.

Not only can significant health benefits be acquired with step counts far below the widely touted “requirement” of 10,000 steps per day, achieving this threshold appears either to provide no additional benefit. In Dr. Lee’s 2019 study, the impact of additional steps on premature death plateaued at about 7,500 daily steps. 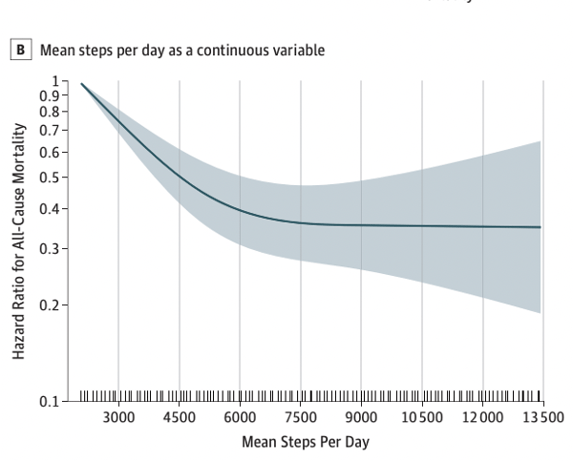 Similarly, a study led by Dr. Pedro F. Saint-Maurice, which contained a more inclusive sample with men and women from various age groups and races, found that while participants who walked 10,000 steps had a lower mortality rate due to cardiovascular disease than those who walked 8,000 steps, the difference was minimal. 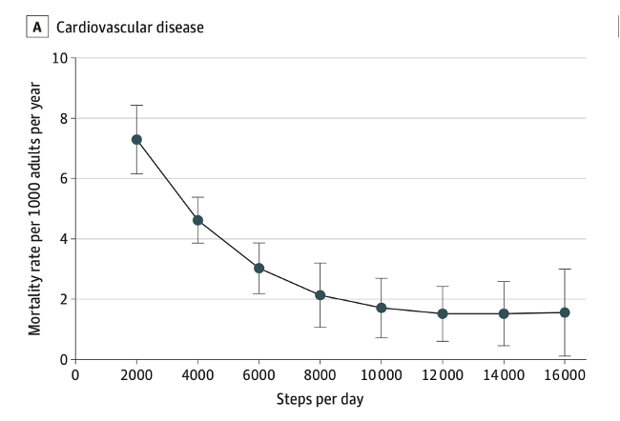 Occasionally, what passes for health wisdom has questionable origins. As a result, wellness professionals should always be sure to verify that the advice they hear or provide is backed by science.

Additionally, it should be kept in mind that there is no one-size-fits-all solution when it comes to step counts and health. While many people can achieve significant health benefits by walking less than 10,000 steps per day, every individual’s particular activity needs will differ depending on several factors.

One of the more important factors to consider is the average number of daily steps typically taken by other members of your age group and gender. A study conducted by the American College of Sports Medicine found that, on average, adult males take about 5,340 steps per day, whereas adult females take around 4,912 steps per day. Similarly, average daily step counts tend to decrease significantly with age. Since the number of steps an individual needs to take per day to achieve optimal health depends on factors like their age and gender, it is well-worth creating a baseline from a cohort similar to that person.

Other Articles In "Holistic Workplace Wellness”

Study: Most Employees Not Comfortable Discussing Mental Health At Work

Mental health is often treated quite differently than other areas of wellness. For example, while...

As employees return to the workplace, employers have more opportunities to address wellness needs...

Around 390 BCE, Plato’s Socrates (i.e., the character Socrates used by Plato to explore his...

How Team Leaders Can Tackle Burnout

From sustained decreases in productivity and engagement to dramatic rises in turnover rates,...

Researchers have greatly expanded their knowledge of the causes and effects of heart health over...

According to the CDC, 600,000 Americans die of heart disease each year, making it the leading cause...

People can become attached to their beliefs. When this happens, they may respond to information...