Numerous studies show that sitting is bad for your health. Prolonged inactivity, such as sitting at a desk all day, has been linked to lower physical and emotional well-being. Now, a recent study delves deeper into sitting and found that all sitting is not the same. Researchers at Columbia University’s Vagelos College of Physicians and Surgeons found that sitting during leisure periods may be worse for your health than sitting at work.

The study looked at 3,500 participants and their sitting activities over eight years, especially when it came to sitting while watching television. The participants were African Americans, a group that had not been highly represented in previous studies and who have a higher risk of heart disease, which can be a byproduct of sedentary behavior. Researchers believe the implications from this study are applicable to all groups.

All Sitting Is Not The Same

Even though participants may spend a long time seated at work, they are more likely to move from their desk frequently and walk a greater distance to go to the restroom, cafeteria, or run an errand. In contrast, people watching television at home are more likely to remain still and may compound that inactivity by sitting after eating a large meal. Cumulative time spent sitting combined with uninterrupted sitting exacerbates the health risks.

Researchers also found some positive news: moderate-to-vigorous physical activity (MVPA) can reverse the health risks of prolonged sitting. MVPA, such as walking briskly (approximately four miles per hour), playing doubles tennis, or vacuuming, raises the heart rate and expends energy. In the study, participants who watched television for four or more hours a day but engaged in MVPA for 150 minutes or more per week did not have an increased risk of heart attack, stroke, or death.

Employees whose jobs require a significant amount of sitting, such as truck drivers and computer programmers, can counter the risks of being sedentary by scheduling movement breaks. 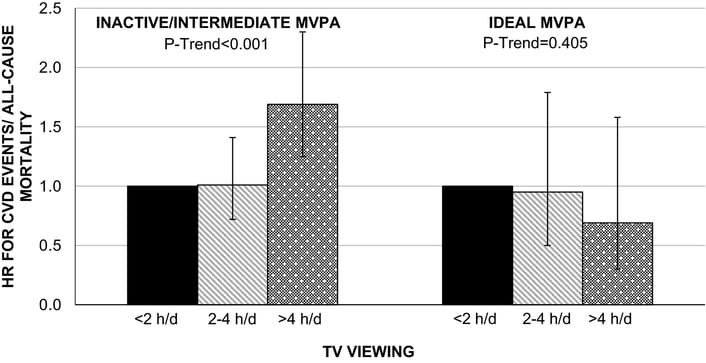 In addition to highlighting the negative impact of prolonged and uninterrupted sitting, this study is a reminder for companies and employees to take a holistic view of wellness. The quest for good health doesn’t stop at the end of the work day. Companies have the responsibility to educate employees on how behaviors—both at work and at home—can ultimately affect employee health and work performance.