Popularized by tech giants like Facebook and Google, open-plan offices designs (i.e., designs that make use of large, open spaces and minimize the use of small, enclosed rooms such as private offices), have been copied by countless employers in the hopes that a barrierless office would inspire workers to interact, collaborate, and innovate.

However, recent research has shown that open-plan offices (OPOs) might not have their intended effects. A study lead by Ethan S. Bernstein, a professor at Harvard Business School, found that open offices spaces lead to 70% fewer in-person interactions. He stated:

Rather than prompting increasingly vibrant face-to-face collaboration, open architecture appeared to trigger a natural human response to socially withdraw from officemates and interact instead over email and IM.

Productivity appears to be negatively impacted as well. In their study on the cognitive performance of workers in traditional office types, Helena Jahncke and David Hallman found that “performance was better (17%) in the cell offices compared to the open-plan offices.”

When it comes to a variety of measures of workplace optimization then, OPOs are underperforming.

For many individuals, their mental-well-being depends on consistent social interaction with others. As a result, reports of intense loneliness, anxiety, and depression spiked dramatically during the pandemic.

In light of this, it is natural to think that, whether or not open plan offices improve collaboration, innovation, or productivity, they are at least good for employees’ psychological well-being. As plausible as this may sound, experimental evidence suggests that the invigorating and revitalizing effects of social interaction are not only nullified but sometimes entirely reversed in OPOs.

Background noise can be particularly irritating when performing cognitive tasks that require even moderate amounts of attention and focus. Since open plan offices remove the physical barriers that would normally block the sounds of a bustling office space, they are liable to be noisier, more distracting, and stress-inducing.

These effects have been experimentally verified. In a study led by Elizabeth (Libby) Sander, subjects were asked to complete a proofreading task while listening to sounds typically heard in an OPO (e.g., people speaking, walking, printing papers, ringing telephones, and keyboard typing noises). Using biometric measures (e.g., heart rate and sweat response) and facial emotional recognition software, participants’ stress levels were compared to a second group of subjects who performed the same task in a simulated private office. The results are unsurprising but significant. After only eight minutes in the simulated OPO, participants experienced a 25% decrease in mood relative to the control group. 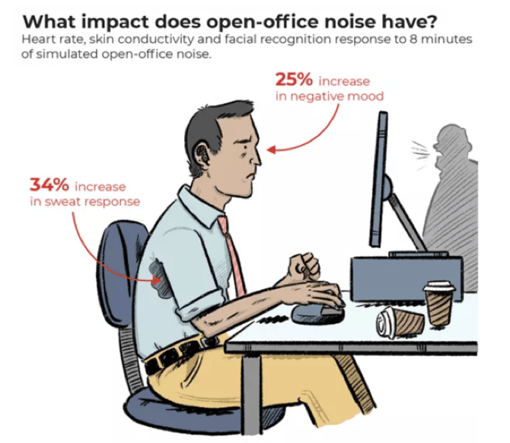 Just as hearing what others are doing in the workplace can be distracting and stressful, so can lacking the ability to control whether others see and hear what you are doing. Studies have found that OPOs can lead to unwanted observation, which in turn leads to feelings of a loss of privacy and personal control over one’s workspace.Similar effects have been established for “sound privacy.” In their study on the relationship between perceived privacy and workplace satisfaction, Jungsoo Kim and Richard de Dear state.

Sound privacy, defined […] as the ability to have conversations without neighbors overhearing and vice-versa, was the most problematic IEQ [Indoor Environmental Quality]issue in open-plan office configurations. Sound privacy elicited the highest levels of IEQ dissatisfaction in open plan offices, and partitions were largely ineffectual at ameliorating this problem

This lack of visual and auditory privacy can come with added pressure. As Insider notes:

Mentally, there's a pressure that comes with open offices. Workers don't want to look like they're not working hard, or like they're ducking out early. […] this means that workers may work longer hours or feel undue pressure to be "on" and engaged 100% of the time, since everyone can see them.

As emphasized in a recent post, businesses looking to bring their employees back into the office are finding resistance. Though some workers are ready and willing to come back, others hope to continue working remotely forever, and some are willing to quit their jobs over it.

According to Rebecca Ray, executive vice president for human capital at The Conference Board, many office-reluctant workers are especially concerned about their psychological well-being. Employers looking to persuade hesitant workers to come back into the office should be especially mindful of the widespread need for mental wellness.

Since office design can have a significant impact on emotional well-being, companies must re-think the open-plan design. One obvious but expensive way to accomplish this OPOs is to structurally re-design the floor plan so that there are more enclosed spaces that provide employees with the desired degree of visual and auditory isolation. However, there are other more effective ways of addressing the issue. As Harvard Business Review notes, “sometimes the best answer doesn’t involve change to the physical structure.”

An alternative approach is to kickstart a cultural shift in the way an organization views the purpose of its physical office spaces. Prior to the pandemic, many believed that employees would not be as productive if they worked remotely. As a result, offices have been viewed as a way of guaranteeing the productivity of employees who otherwise could not be trusted to get their work done effectively and efficiently. This belief has been thoroughly refuted. Moving forward, organizations should encourage their employees to use their physical offices for collaborations and other kinds of work that can’t be accomplished remotely. When employees share this view of the office, they are likely to come to it with a set of intentions and expectations that won’t be negatively impacted by the aspects of OPOs that make solo knowledge work difficult and stressful.

Other Articles In "Holistic Workplace Wellness”

Study: Most Employees Not Comfortable Discussing Mental Health At Work

Mental health is often treated quite differently than other areas of wellness. For example, while...

As employees return to the workplace, employers have more opportunities to address wellness needs...

Around 390 BCE, Plato’s Socrates (i.e., the character Socrates used by Plato to explore his...

How Team Leaders Can Tackle Burnout

From sustained decreases in productivity and engagement to dramatic rises in turnover rates,...

Researchers have greatly expanded their knowledge of the causes and effects of heart health over...

According to the CDC, 600,000 Americans die of heart disease each year, making it the leading cause...

People can become attached to their beliefs. When this happens, they may respond to information...