The Centers for Disease Control and Prevention (CDC) recently released new data maps identifying the prevalence of adult physical inactivity across the United States. The results were discouraging. In every single state, the District of Columbia, and the territories of Puerto Rico and Guam, more than 15% of the population reported being physically inactive. In fact, the vast majority of states reported levels between 20% to 30%.

This is a serious health issue. Inactivity contributes to 10% of premature deaths in the U.S., and physical activity affects many areas of well-being. Being active greatly reduces the risk of obesity and chronic conditions like heart disease, type 2 diabetes, and some cancers. It can also improve mental health, stress management, and sleep quality. Ultimately, this translates to healthier, happier employees and a vastly more productive workforce. 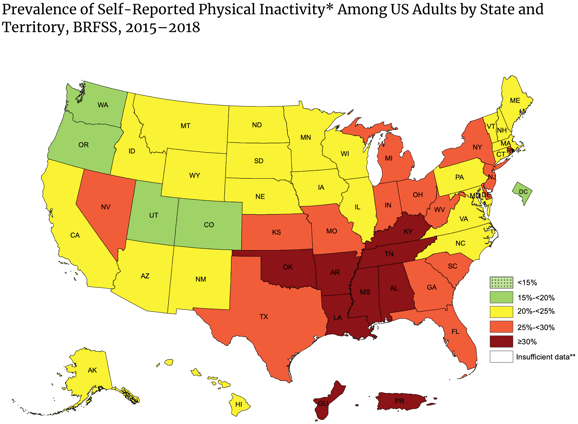 For the CDC’s report, respondents were asked to define whether or not they were currently physically inactive, which was defined as “engaging in no leisure-time physical activity during the past month.” It’s currently recommended that adults get at least a total of 150 minutes of moderate-intensity physical activity each week. Considering this, even those that did not report being physically inactive could still be getting well under the recommended amount of movement and exercise into their schedule.

The South (28%) and the two US territories had the highest levels of reported inactivity. Puerto Rico topped the list, with nearly half (47.7%) of its adult population reporting no physical activity. In Tennessee, Oklahoma, Louisiana, Alabama, Kentucky, Arkansas, and Guam, a whopping 30% or more of adults were physically inactive.

Western states had the most active populations, with only 20.5% inactive overall. Colorado’s population had the lowest estimate of all states at 17.3%. Washington, Utah, and Oregon also achieved levels under 20%. The Northeast (25.8%) and Midwest (25%) both had roughly a quarter of adults not getting any physical activity.

The study also broke down statistics by ethnicity and race. Hispanics (31.7%) had the highest prevalence of physical inactivity, followed by non-Hispanic blacks (30.3%) and non-Hispanic whites (23.4%). These differences were often even more significant when broken down by state.

It’s estimated that inadequate levels of physical activity are associated with $117 billion in annual healthcare costs. Thus, in addition to the wellness benefits for employees, a more active workforce equates to savings in costs and resources.

By taking into consideration location and demographics, benefits can be tailored to encourage more physical activity among employees. Presumably, states that rank poorly in activity have the most to gain from an activity-oriented wellness programs.

It’s important to note that location isn’t the only factor when evaluating workers’ needs. It’s worth considering that job industry, company culture, socioeconomic status, and other health issues can also provide insight on an employee’s activity levels. Even employers in Western states should be mindful that many adults still fail to get in enough regular activity.

Offerings like gym membership reimbursements or subsidies can improve accessibility to fitness opportunities. Health education and literacy can also motivate more people to move more and sit less. Social-oriented programs, such as company-wide wellness challenges and health classes, as well as an office culture that prioritizes an active lifestyle, can change an employee’s perception of physical activity into something more positive and fun.

While being more active can have enormous benefits on a personal and professional level, many of these benefits do not involve a lot of resources to implement. Even something as simple as regular reminders for employees to take a work break or go for a walk outside can be a first step to encouraging healthy levels of movement.

Other Articles In "Wellness”

Since the creation of the Turing Test in the 1950s, researchers and inventors have been trying to...

The Philosophy Of “Being Well”

Employers are becoming increasingly concerned with the well-being of their employees. As a result,...

Ethics And Well-Being: An Introduction

In light of a number of events that have transpired over the past year, the elements required to...

As the stigma around mental conditions continues to decrease and holistic health approaches grow in...

Nearly a year into the COVID-19 pandemic, employee mental health is at an all-time low. In addition...

With companies like Peloton and ICON (behind the NordicTrack and Freemotion brands) posting record...

Over the past year, employee wellness needs have largely revolved around specific COVID-19 health...

Loneliness On The Rise For Those Under Lockdown

Loneliness has been a growing health issue for years, but pandemic-related policies have fueled its...

Over the last century, Americans’ spending on non-essential consumer goods and services has grown...