Consumer Reports: Not All Medical Screenings Are Created Equal 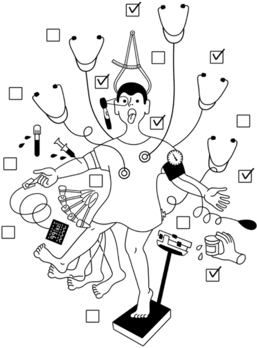 The title of this post should come as no surprise since Consumer Reports is primarily using U.S. Preventive Services Task Force (USPSTF) guidance, which has long suggested that Americans and employers are over-screening.  The USPSTF is an independent expert panel that makes recommendations to the government and medical organizations about preventive care.  Simply put, Consumer Reports nicely summarizes what everyone should know about proactive screenings: some may be life-saving, but others can waste time and money as well as pose risks.

The genesis of proactive screenings started in a small town not too far from Wellable’s headquarters.  The U.S. Public Health Service decided to look for signs of diabetes in residents of Oxford, Massachusetts.  To do this, they tested the urine and blood glucose of almost three-quarters of the town’s nearly 5,000 residents.  They were testing the hypothesis that early detection of diabetes through mass screenings could prevent life-altering complications such as heart disease and nerve damage.  Within a few years, diabetes screenings were being done across the country, and similar tests for other diseases quickly followed.  Now, physicians and employers encourage scores of screenings, and there is a large direct-to-consumer market for individuals to get test results outside of traditional means.

In terms of efficacy, proactive screenings can be an incredible boon for public health, but they need to be applied correctly.  For example, screenings done at the right age and frequency can cut the risk of colorectal cancer death by as much as half, and a blood pressure check can reveal hypertension, which, if treated, may reduce the risk of heart attack and stroke by more than 20%.  The real problem is that Americans as a whole only get half of the preventive care, including screenings, that they should, and many Americans are being over-screened (too frequently, with inaccurate tests, at the wrong age, etc.).

The rise in over-screening is a product of a number of factors.  Two primary culprits are direct-to-consumer testing companies aggressively marketing their products and employers that are making certain screens mandatory and/or tied to significant incentives.  It is particularly alarming to see employers pushing medically unnecessary tests.  Not only are these tests expensive, especially when considering the rewards needed to get employees to complete them, but they also put many employees at risk.

Screenings can pick up harmless abnormalities or produce false positive test results, which incorrectly indicate the presence of a disease.  That can lead to unnecessary and invasive tests and surgeries, which have their own risks.  Also, some screenings miss things they are designed to detect, which gives employees a false sense of security.  For example, according to the American Cancer Society, mammograms fail to find one in five breast cancers.  Wellable created a short video to demonstrate the math behind blood testing.  The video demonstrates why employee wellness programs should not include medical screenings as part of their programs.

A quick and dirty rule for a “healthy” employee wellness program is to not violate guidance from the USPSTF.  It is important to note that the USPSTF does not consider the costs of a preventive service when determining their recommendations.  When costs are considered, the case against having screenings in employee wellness programs is strengthened.