Many articles, including ones on this blog, have touted the benefits of employee retention. For countless companies, employee retention is a primary driver for investing in enhanced benefits, including employee wellness programs, and it is often the focus of academic research. However, most studies focus on the costs of unwanted turnover, from loss in productivity to expenses associated with recruitment. A new study explores an often overlooked element of retention. That is, what are the costs of retaining employees that want to leave?

The research, which was published in the Journal of Managerial Issues, builds upon previous works and classified employees into “four proximal withdrawal states,” or categories:

Prior research found similarities in these groups. Reluctant stayers and enthusiastic leavers were similar in that they displayed low levels of affective commitment, job satisfaction, and job embeddedness. Reluctant leavers are also similar to enthusiastic stayers in that they demonstrate relatively high levels of positive affect. As one would expect, organizations derive most value from enthusiastic stayers (based on meta-analytic support for the notion that higher levels of job satisfaction, organizational commitment, and job embeddedness tend toward higher individual job performance).

The researchers used data collected in four waves that were six months apart from employees at two organizations based in the US. The first organization was a non-profit conservation and development organization with operations on four continents, and the second was the fundraising division of a comprehensive university. In order to be included in the final sample, an individual needed to complete three of four semi-annual observations. Of the original 477 participants in both organizations who responded to one or more semiannual surveys, 207 met this inclusion criteria. 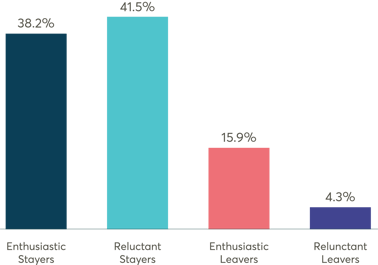 The researchers found that job alternatives, job embeddedness in the organization, and job satisfaction were significant predictors of the likelihood an individual was classified into one of the four proximal withdrawal states. Specifically, the final value of perceived job alternatives positively predicts enthusiastic leaving while the slopes do not. They also found that individuals who perceive higher final levels of job embeddedness in an organization were more likely to be Enthusiastic Stayers. No evidence was found that employees with more positive job embeddedness slopes over time were more likely to be Reluctant Stayers than Enthusiastic Leavers or Reluctant Leavers.

Surprisingly, individuals who had higher levels of job satisfaction on their last survey were more likely to be Enthusiastic Leavers than members of any other group. This indicates that Reluctant Leavers tended to have a more positive trend in job satisfaction over the two-year period leading up to their departure than the other groups had over the same period. Lastly, no significant differences in final job performance ratings and job performance rating slopes between groups were found.

Employers should continue to focus on employee retention as a key metric for business success. However, they should distinguish between good and bad retention. This study shows there are a number of factors that accurately predict what category an employee may be in as well as the financial impact of retaining the wrong talent at a company. Since Reluctant Stayers may comprise a large portion of a company’s workforce, there is a strong financial case for employers to take appropriate actions to address this problem.

To start employers should focus on addressing and improving key factors, such as job alternatives, job embeddedness in the organization, and job satisfaction. Specifically, increasing the final level of job embeddedness is the best way to move someone from being a Reluctant Stayer to an Enthusiastic Stayer.