Most People Are Lonely—And Their Work Life Isn’t Helping

With advances in technology, it seems like the world is getting smaller; in spite of this, social relationships are deteriorating. Cigna’s 2020 Loneliness Index, an assessment of data collected from over 10,400 adults, reported a 7% increase in loneliness since the previous year. Now, three out of five adults say they experience some level of loneliness.

While people from all different backgrounds reported loneliness, some demographics were significantly more at risk than others. Nearly 80% of Generation Z and 70% of millennials report loneliness, compared to just half of baby boomers. Men, Hispanic and black adults, low-income individuals, and those in rural communities were also all more likely to be lonely than their peers. 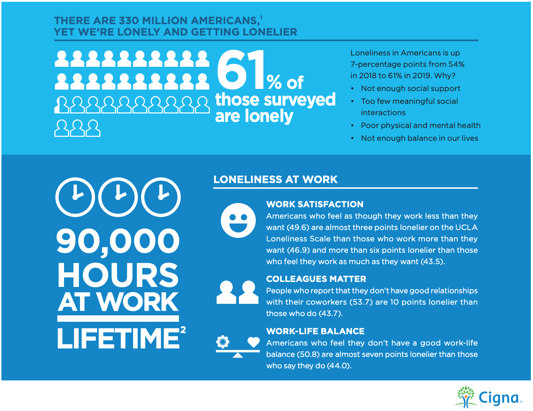 Cigna’s President and CEO, David Cordani, attributes this rise in social isolation and disengagement to an increasing reliance on certain technologies and an “always-on” work culture. Telecommuting, flexible schedules, remote work, and electronic communication are all creating isolation within work groups. After work, extra time spent on social media along with the constant ability to reply to business emails and messages are deteriorating personal relationships with friends and family.

Those surveyed report that a small personal support system, few meaningful social interactions, poor physical and mental health, and a difficult work-life balance are contributing to these feelings of loneliness the most.

Cigna researchers analyzed several correlations between work habits and loneliness. Half of those surveyed reported that they don’t have a good work-life balance. Using the UCLA Loneliness Scale, these same individuals scored almost seven points higher in loneliness. There are also more people who do not get along with their coworkers than those that do, and these workers report being an average of 10 points lonelier.

The Cost of Loneliness

Today, more people understand that well-being functions in a holistic way. Social disengagement can have drastic effects on other areas of health. Isolation can lead to depression, anxiety, stress, and other mental health and behavioral issues.

Even physical health and mortality rates are affected. This was first observed decades ago when the survival rate dropped for infants in orphanages that did not receive adequate social interaction. Some studies suggest that loneliness is just as dangerous as smoking a pack of cigarettes every day. In fact, being able to reverse social isolation may improve physical health more than becoming active or achieving a healthy weight.

In addition to the health detriments employees may experience, social isolation can also have a substantial impact on productivity. Cigna found that lonely individuals were also less productive, more likely to miss work, and less able to submit quality work.

Combat Social Isolation In The Workplace

Promisingly, the relationship between work habits and loneliness suggests that a company can greatly influence the success of their workforce’s social well-being.

Additionally, while some aspects of new technology might be making social isolation worse, not all of it should be viewed as bad. Technology can also help facilitate more connections, by opening up more lines of communication between team members and off-site workers. Importantly, this communication should not consume time beyond work hours, in order to allow an employee to focus on friends, family, and personal needs.

A holistic program that includes support for mental health, mindfulness, and physical fitness can also improve social engagement. Tools such as online appointment scheduling, provider referrals, accessible health content resources, and group challenges can all make it easier for employees to prioritize their wellness. By doing this, other health issues are less likely to interfere with a healthy social life.

Study: The Perfect Exercise Program Exists, But It’s Different For Everyone