Study: iPhone Step Tracking Accurate, Distance Not So Much

Although wearable devices offer a number of benefits, cost often makes them prohibitive for employees to purchase on their own and companies to subsidize part or all of the price for employees.  As such, many wellness technology platforms, including Wellable, integrate with apps that use accelerometer data from smartphones to track steps.  This provides a free alternative to wearable devices while offering benefits such as verified tracking.  Many of these apps are also pre-installed on smartphones (e.g., Apple Health on iPhone, S Health on Samsung devices, etc.), removing a barrier to participation for many employees.

A major concern of free step tracking apps has always been the accuracy of these technologies, especially for administrators overseeing wellness programs with significant incentives for employees to hit certain goals.  In 2015, a great study was published on the accuracy of smartphone apps and wearable devices, finding that they were equally accurate.  It is important to note that at the time the study was published, both types of technologies were still very much in their nascency (Apple Watch had yet to released) and great improvements to tracking were still to come.

There have been few studies updating the findings from the 2015 study.  Fortunately, a study published in npj Digital Medicine helps address the accuracy of step tracking apps.  The study focused on gauging a patients’ activity for conditions like peripheral artery disease (PAD).  Since this was a review for clinical purposes, the standard is higher than for recreational use.  The findings suggest that the iPhone’s step measurement capabilities are sufficient enough to monitor and measure patients’ activity remotely.  However, the device’s built-in walking distance measurement algorithm is inconsistent and should not be used for gauging patient activity.  Specifically, the smartphone's distance measurement algorithm does not appear to account for the length of an individual's strides, making it difficult to recommend for health applications.

“We…feel confident that steps measured by an iPhone app can be used as a metric for remote physical activity tracking in PAD patients.”

– Raheel Ata and other researchers

The study compared iPhone results with tracking information capture via the ActiGraph GT9X Activity Monitor, which patients wore during the study, and manual recording.  Researchers found the iPhone’s CoreMotion Pedometer underestimated steps by a mean of just 7.2% and demonstrated a mean percent difference of 5.7% when compared to an ActiGraph GT9X Activity Monitor.  On the other hand, the iPhone pedometer’s algorithm to estimate distance walked overestimated user’s travel by 43%, which the researchers attributed to its inaccurate application of users’ stride length. 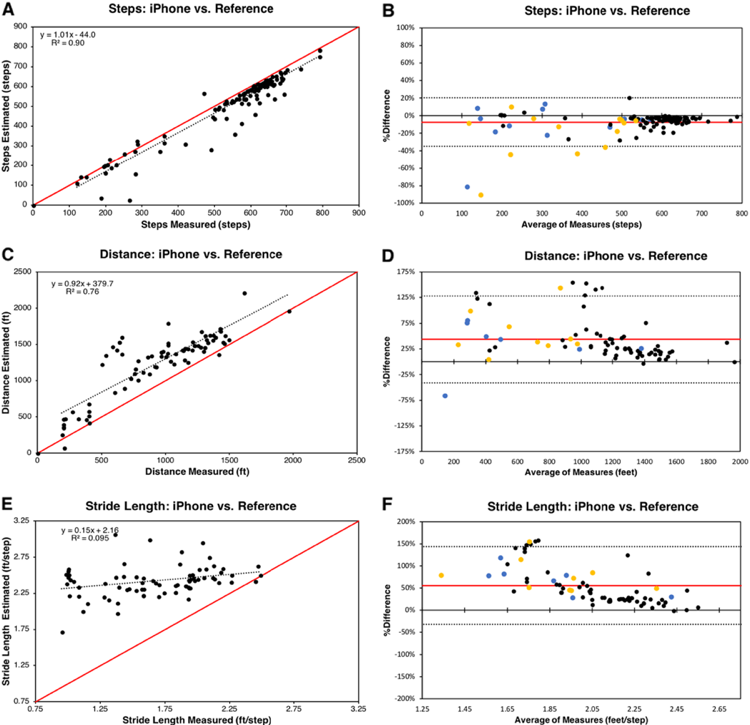 For employers evaluating wellness technology platforms, it will be important for them to consider how tracking of steps and distance is incorporated into the program.