Fitbit Gets Into The Smartwatch App Game

Fitbit announced the first major update to its Fitbit OS software that runs on its flagship Ionic smartwatch. The update brings Fitbit Ionic users access to more than 100 data-rich clock faces and more than 60 apps. Fitbit was nice enough to create a list of 14 major brands that are now part of the Fitbit ecosystem, including New York Times and Uber (for those times when driving is preferable to walking).

The announcement of the Fitbit OS update came with the unveiling of Fitbit Labs, which is “an initiative within the Fitbit Research department dedicated to creating and testing potential Fitbit features.” The launch of Fitbit Labs allows Fitbit to ensure that it does not need to rely solely on its third-party developer community to deliver quality, innovative, and interactive apps to its ecosystem. Despite only being a few months since its launch, Ionic already as several apps for its users to enjoy. Below is a list of Wellable’s favorite Fitbit OS apps from Fitbit Labs and third parties. 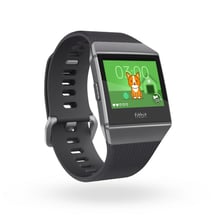 This clock face is another way Fitbit is gamifying movement – Tamagotchi style, that is. Users adopt one of four virtual pets and take steps to keep them happy. In order to feed their pet, users need to walk enough to feed them at least eight treats (1 treat = 10% of daily step goal). Users who do not hit their goal will wake up the next day to find out that their pet left them for someone who moves. To encourage sleep, each pet goes to bed at 10 PM local time, gently reminding the user to do the same.

This app may not make you the next Roger Federer, but it is at least a “step” in the right direction. By wearing their Ionic on their racquet wrist while playing tennis, users will receive insights into their playing style and a breakdown of shots by forehand, backhand, and serve. Tennis also is also able to track match scores.

With Game Golf, Ionic users no longer need a smartphone or computer to find a course. The app also works as a range-finder on more than 37,000 courses. At the end of the round, it will display statistics, both game- and health-related, including steps and average heart rate.

Although this app will not be available until January, it still made the favorites list because making healthy purchasing decisions are often overlooked. The app will allow users to locate a nearby Walgreens store and track Walgreens Balance Rewards. They can even use their Ionic to redeem rewards at the retailer by displaying a barcode the cashier can scan.

The lineup of apps available on the Fitbit OS is impressive. Fitbit is still early in the app game, and it is important to remember that the Google Play and iTunes took years to build. If Fitbit’s early splash with smartwatches is any indication of where things are headed, it looks like consumers will be the real winners. They will be the beneficiaries of numerous free apps to improve their daily lives beyond just health. If employers learn anything from the Wellable Blog, it should be that they need to embrace the consumer movement by leveraging and building upon the efforts made by Fitbit and others to increase health engagement.

Although many apps are not related to health and wellness, they still have an impact on device adherence, which is critical for activity trackers delivering results. With 70% of Fitbit users churning in less than 12 months, wearable activity trackers must make themselves more critical to the daily lives of their users. Incorporating apps like New York Times and Uber is a huge step in the right direction. Greater adherence to wearable devices because of non-wellness features will benefit wellness administrators greatly by mitigating the risk of employees losing interest in or stopping use of the device.

60+ Unique Team Names To Use In Your Next Wellness Challenge