As the upcoming holiday season approaches, leading wearable device companies are announcing new devices with minor and major updates relative to current product lines. Below is a quick overview of what to expect from the next generation of wearable devices.

Garmin is coming out with three new models, two of which are full-fledged smartwatches while one focuses more on activity and fitness tracking.

Vivosport ($199.99)
The Vivosport is a GPS-enabled activity tracker that boasts seven days of battery life in “smartwatch” mode and up to eight hours in GPS mode, beating out many other competing devices, such as the Apple Watch’s two-day battery life. It is not, however, considered a full smartwatch but has a slim design that focuses on lightweight wearability.

Vivomove ($199.99 Sport Model ; $299.99 Upgraded Version)
The Vivomove line of wearable devices are smartwatches equipped with heart rate monitoring and a full touch screen. This is Garmin’s first hybrid touchscreen watch, which means it has a traditional analog watch face with a built-in digital sub-display.

Vivoactive 3 ($299.99 - $329.99)
The Vivoactive 3 is Garmin’s biggest smartwatch launch to date. It includes the most activity tracking capabilities (heart rate monitoring and GPS) as well as Garmin Pay, which supports both Visa and MasterCard credit and debit cards. The Vivoactive 3 also has an impressive battery life with seven days in smartwatch mode and 13 hours if you’re using constant GPS tracking. It supports both built-in sports apps for up to 15 different activities, as well as additional user-customizable activity apps.

All three models come with Garmin Move IQ, which will automatically categorizes and records a number of activities in case users forget to log the activities using built-in apps.

Fitbit Ionic ($300.00)
Fitbit is launching one new device this holiday season. The Ionic is “Fitbit’s first smartwatch” (though, arguably, Blaze and

Surge were both smartwatch-esque). In addition to basic functions like fitness (steps, calories, floors climbed, sleep, and cardio fitness levels) and sleep tracking, Ionic will also include contactless payments, music, and more. Its battery lasts more than four days on a single charge, which is lower than Garmin’s latest releases but much more than that of Apple Watch. It is also water-resistant up to 50 meters, which means users can freely swim or shower with the tracker. 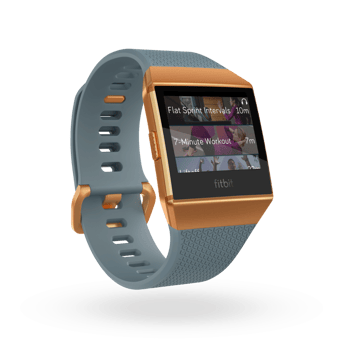 A new addition to the Fitbit family is the on-watch personal trainer, where users can access customized workouts based on data as well as guided running and walking sessions (essentially a rebranding effort of the existing FitStar tool). It can also hold more than 300 songs or play Pandora stations while offline (available only to paid users).

As a smartwatch, Ionic can receive all phone notifications, including texts, calls, and other app alerts. Unfortunately, its app directory is not as prolific as its competitors like the Apple Watch or other Android Wear devices, coming pre-loaded with only Starbucks, Pandora, Strava, and AccuWeather.

In its effort to beat the Apple Watch Series 3 to the market, Samsung just released two new smartwatch models.

Samsung Gear Sport (Pricing Not Available)
The Gear Sport includes traditional sensors like heart rate, accelerometer, gyroscope, barometer, and more. While Fitbit decided to go with Pandora, Samsung joined forces with Spotify, allowing paid users to listen to music on the popular app while offline. Samsung also partnered with Under Armour, which provides users with a 12-month, premium-tiered membership and access to their suite of fitness and wellness apps, like UA Record, MyFitnessPal, MapMyRun, and Endomondo. Last but not least, the partnership with Speedo brings an accurate swimming tracking ability to aquatic athletes.

Samsung’s Gear Fit 2 Pro ($199.99)
Presented as more of a GPS fitness band than a smartwatch, this model has undergone few changes from its predecessor, the Gear Fit 2. The only substantial difference is a more textured band and water-resistance capability, allowing users to swim and shower with the watch on-wrist.

Misfit Vapor ($199.00)
Having launched the Misfit Phase last year, the company decides to take on the smartwatch market with its new product, Misfit Vapor. Now owned by Fossil Group, Misfit hasn’t lost touch with its fashionable side; Vapor dons a circular and stylish full touchscreen display and a heart rate monitor (making it the first smartwatch under Fossil to offer this functionality). However, the watch dropped the built-in GPS since its first announcement, which makes it similar to the Apple Watch Series 1 where users would have to bring their phones along if they want GPS tracking.

Fossil Q Venture/Explorist ($275.00 - $315.00)
These smartwatches focus much less on fitness compared to your typical Fitbit or Garmin, but still has some fitness tracking capabilities and integrations such as Google Fit, UA Record, and MyFitnessPal. This is somewhat understandable, as the smartwatch market is approaching oversaturation and companies are trying to appeal to a slightly different audience. Fossil watches will cater more to the fashion-oriented consumer, rather than the full-fledged fitness fanatics who would go for a Fitbit or a Garmin. It also has mobile payment capability.

While we have to wait until September 12th to see Apple’s plan for the Apple Watch, it is rumored to have LTE capability, which allows for use of the device without having to bring along a phone. A welcomed improvement to this watch would be better battery life since most of its competitors are now boasting four to five days (or more) on full charge.

IDC, the International Data Corporation, just came out with its quarterly wearables tracking statistics. According to the report, wearable shipments overall grew 10.3% year over year, but most of the growth is fueled by the development in the smartwatch market (the IDC defines smartwatches as devices that can run third-party apps). Specifically, smartwatch shipments grew 60%, while “basic wearables” dropped around 1%.

This transition is understandable, given the fact that smartwatches are stickier since they are more versatile and prove useful to users even outside of fitness activities. Since they can support communications, check news, play games, and more, users have more reasons to keep it charged and on their wrists, unlike many previous basic devices that ended up in the drawers. With companies adding contactless payment and Apple adding LTE functionality, smartwatches might become the only thing people need when running out for quick trips or going to work out. If this trend continues, smartwatches might slowly become a must-have and no longer a nice-to-have.