Employers Must Respond To Changes In Employee Retirement Plans

The traditional goal of retiring at 65 is becoming a thing of the past. According to a recent survey conducted by the National Institute on Retirement Security, about one third of working Americans say their retirement plans have changed as a result of the pandemic. Among those whose plans have changed, two-thirds say that they plan to retire later, one quarter expect to retire earlier, and seven percent do no plan to retire at all. 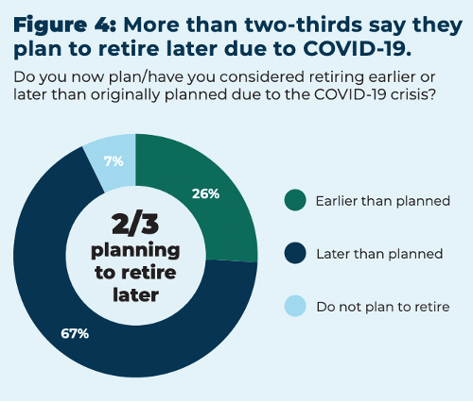 Image credit to the National Institute on Retirement Security

To respond to workers’ shifting retirement plans, employers need to change the way they help their employees achieve their short- and long-term financial goals. To do so successfully, however, it is important to have a clear understanding of how and why the pandemic has led different groups to form opposing attitudes towards retirement.

Workers Who Plan On Retiring Early

According to a Pew Research Center analysis of monthly labor force data, the number of baby boomers who retired in 2020 is more than double the amount that retired in 2019. Some workers were forced into early retirement because they lost their jobs and could not find suitable replacements. Others chose to retire to cash in on rising stock values. As Bloomberg reports, “people who have investments are taking advantage of the unprecedented surge in shares and home values to enjoy their silver years.”

Workers Who Plan On Retiring Late

The pandemic has hurt the financial standing of many workers in a variety of ways. Many have had their hours decreased, some have had their pay docked, and others have been furloughed or laid off. As a result, many individuals are concerned about their ability to save enough money by the time they retire. In some cases, their confidence is so strongly shaken that it persists in the face of opposing advice from financial experts. In her interview with Forbes, Kimberly Foss, founder of Empyrion Wealth Management, emphasized the intense reluctance that her clients often feel when they are told they are can still retire on time. She states, “I’ve shown them the numbers, I’ve re-run the simulations, and they still can’t accept that they have the assets they need to continue living their chosen lifestyle.”

Because of this, many employees are likely to continue working after the traditional retirement age of 65 to reclaim the actual or perceived loss of long-term financial security.

Workers Who Don’t Plan On Retiring At All

Not every American has been dealt a financial blow during the pandemic. As Wellable reported in a recent post, many workers who kept their jobs are considering leaving them for more fulfilling positions. With rising asset prices and a newly acquired awareness of the impact that their jobs can have on their health and well-being, these individuals are ready to take financial risks for happiness and fulfillment.

In some cases, this involves starting a new job or business venture, not retiring entirely. For instance, Nate Mosely, a 29-year-old buyer at a major clothing retailer told the New York Times that he plans to move to the Caribbean to open a tourism business. This suggests that for some workers, retirement, in the sense of not working at all, is not the ideal outcome for them. As Jacquelyn Reardon, director of retirement & insurance marketing at Franklin Templeton states.

Maybe [employees] don't want to stop working, […] “maybe they want to change jobs or start a new business or get involved in charities and philanthropy. So we're seeing this big shift away from retirement as this one-time event or milestone that everybody is working towards.”

What some employees have learned from their work experiences during the pandemic then, is not that they would avoid working if they could, but that they desire or even require a job that makes them happy.

How Should Employers Respond?

Given that employees’ retirement plans are becoming more diverse, employers need to adapt and modify the ways in which they help their employees achieve their financial goals. Rather than providing one path to financial security, companies need to offer personalized and customizable plans that are tailored to meet the various financial needs of today’s workers. To accomplish this, organizations can start by learning more about the monetary circumstances and aspirations of their employees. With this information in hand, employers can offer more desirable and impactful financial benefits. For instance, were employers to learn that their Millennial and Gen Z employees have college loans to pay, they could offer student loan assistance programs. On top of that, employers should consider providing financial education services and programs so that their employees can confidently and competently navigate their personal finances.