Empathy, often understood as the tendency or ability to take the perspective of others and feel the emotions and attitudes that they are experiencing, is an indispensable ingredient in cooperative, compassionate, and productive relationships. Without it, individuals struggle to understand where others are coming from or to make them feel heard. As a result, they are unlikely to end their exchanges with mutually desirable outcomes and ultimately to cultivate or maintain positive connections. 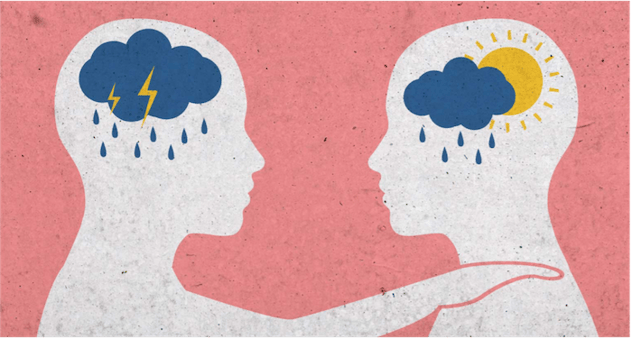 Because of the impact of empathy on collaborative and respectful interactions, the cultivation of empathic tendencies is a key ingredient in workplace optimization. As The Washington Post reports, “organizations that teach their managers to show empathy in all aspects of work will discover exponential rewards, like increased loyalty and retention, productivity, and happier employees.” As a result, employers are looking for ways to enhance the empathetic responses of both themselves and their employees as they interact with each other and their customers.

Used most frequently to enhance the experience of gamers and cinema viewers, virtual reality (VR) or, more specifically, head-mounted displays (HMDs), are being tested for their use in pro-social applications. Since empathy involves taking on the perspective of another person and VR can generate immersive experiences of any kind, including those that involve being or having the characteristics of other people, HMDs appear to be fine-tuned to give rise to momentary and even lasting empathy.

Researchers have begun to verify this potential of VR. For instance, Jeremy Bailenson, a professor of communication at Stanford University, found that subjects who performed a series of tasks while experiencing a simulation of colorblindness delivered via HMDs were more prone to have empathic responses toward colorblind individuals than subjects who were merely asked to imagine being colorblind while performing the same tasks.

Recently, organizations are relying on the empirically supported pro empathic effects of VR to optimize their workforces. Walmart partnered with Strivir, a Palo Alto-based VR company that specializes in creating workplace training programs, to help their retail associates, who often deal with angry and disgruntled customers, learn how to de-escalate tense interactions through empathic responses. With their headset on, employees encounter an upset shopper and are provided with suggestions on how to respond in empathic and kind ways (e.g., by validating the customer’s grievances). Then, associates witness the interaction from the client’s point of view. 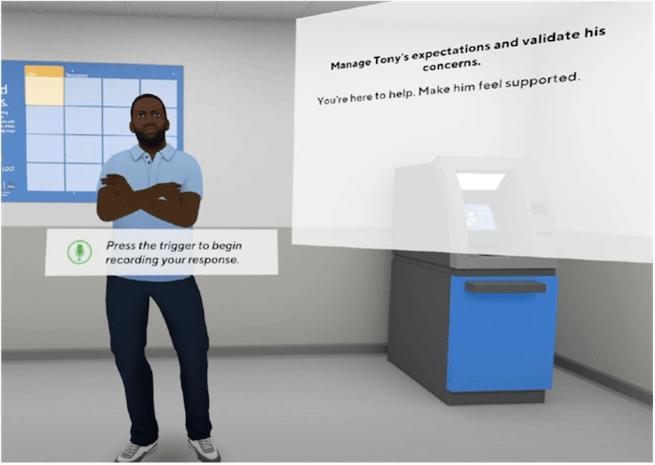 Fundamentally, our employees were doing all of the things that we wanted them to do, but there was something missing in our customer interactions. There was not enough of a human connection, so we made it a priority to focus our training on developing empathy.

Their efforts paid off. After implementing the VR training, H&R Block saw a 50% decrease in dissatisfied customers. Workers at Walmart appear to be exhibiting the pro empathic effects of VR as well. Heather Durtschi, Senior Director of Learning, Content Design and Development at Walmart, highlighted a notable example in which confrontational customer made national news. The employee involved was able to defuse the situation and credited her success to her VR empathy training. Durtschi stated, “It got pretty ugly, but that associate remained so calm,” […] “Afterward, when she was interviewed and asked how she handled it so well, it came back to the training she received.”

Researchers highlight three properties of VR when explaining its impact on empathy – immersion, presence, and embodiment. VR is immersive in the sense that it can stimulate all the user’s senses while blocking out sensory information coming from the outside world, drawing their attention away from the physical world and directing it towards the virtual one in front of them. Presence is related to immersion and refers to the tendency of VR users to feel as though they are “inside” the virtual worlds they are presented with. Embodiment occurs when VR induces the illusion of ownership of a fake limb or even an entire fake body.

It is easy to see why these aspects of VR help it cultivate empathy, since empathy involves seeing things from another’s perspective and mirroring their emotions and attitudes. It is important to note, however, that when it comes to workplace optimization, immersion, presence, and embodiment are good for much more than empathy. For instance, as Harvard Business Review notes, the immersive nature of VR allows employees to practice various soft skills in safe, low-stakes environments.

Additionally, VR can be used to help remote workers feel as though they are working in the same space as one another, helping employees develop a sense of community and potentially sparking innovation that some experts argue requires spontaneous in-person interactions. For instance, MeetingVR provides employees specially designed virtual workspaces for workshops and meetings where workers can interact with their colleagues’ avatars in real-time.

Technologies often have surprising use cases. VR is a prime example of this. Though it is often viewed as an invention for consumer applications, virtual reality has the potential to increase the empathic tendencies of an organization’s employees, thereby strengthening their connections with colleagues, sparking innovation, fostering healthy communication with customers, and promoting company loyalty. In light of this, companies should be open minded when it comes to utilizing technologies that, at first glance, appear to have no place in the working world.

Get our stories delivered From us to your inbox weekly.

The Workplace Is An Opportunity For Health Promotion

Only about 20% of American adults over the age of 18 get the recommended amount of physical...

Wellness Boosts Creativity In The Workplace

The buzz around the efficacy of employer wellness programs often misses the full picture by...

According to a study by the University of East Anglia in England, employees’ perception of fairness...

A recent article published on Slate, an online magazine of news, politics, technology, and culture,...

Study: Fun Facts About Wearables In The Workplace

A study published by Jiff evaluated two years of employer-sponsored wearable data and revealed a...

Simon Sinek: Millennials In The Workplace

Below is a video excerpt from Simon Sinek, a leadership and organizational development expert,...

Technology companies are widely seen as organizations on the forefront of workplace trends.  This...

Meditation is no longer considered as a mystical practice reserved exclusively for monks and new...

Despite offering the greatest benefits to the most unhealthy employees, a study published in the...

According to a list from Employee Benefit News on 15 trending workplace benefits, employee wellness...

With recent evidence highlighting the considerable effect financial hardships have on employee...

Due to the widespread availability and convenience of junk food in workplaces, office employees...

Importance Of Employee Benefits Accelerates Due To Pandemic

COVID-19 continues to accelerate existing trends in the workplace. First, it was digitization and...

To help organizations understand the preferences of employees in regard to returning to the...

Diversity And Inclusion In The Workplace: Why It Matters And How To Cultivate It

It is commonly accepted that businesses who strive to increase workplace diversity and inclusion...

Five Things Employers Can Do To Create A Safe, Inclusive, And Equitable Space For LGBTQ+ Employees

LGBTQ+ workers deal with an overwhelming set of obstacles, harms, and inequities in the workplace....

As pandemic-induced restrictions continue to place limits on in-person interactions, employers have...