Despite offering the greatest benefits to the most unhealthy employees, a study published by the National Bureau of Economic Research found that individuals in the middle of the healthcare spending range were the most likely to participate in employee wellness programs. That is, the researchers found a “strong pattern of selection” among program participants, who, during the prior year of the study, had lower medical expenditures and healthier behaviors than non-participants. Specifically, the annual medical spend among wellness program participants was $1,574 less than among non-participants, on average. 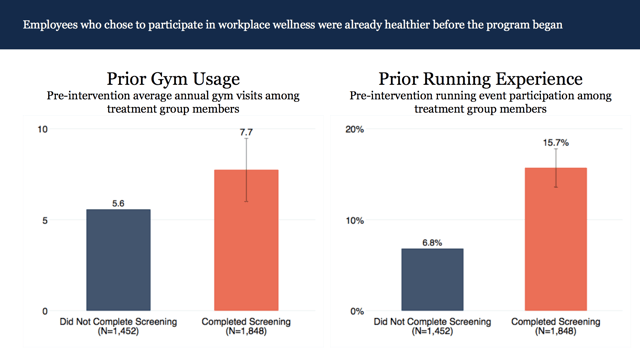 The employee wellness program designed by the researchers included an on-site biometric health screening, an online health risk assessment (HRA), and a wide variety of wellness activities (e.g., smoking cessation, stress management, and recreational classes). The financial incentives for the programs ranged from $50 to $350, and the amounts were randomly assigned and communicated at the beginning of the program. Fifty-six percent of the eligible employees participated in the program, but as noted earlier, the participants were generally not the individuals with the highest medical expenses. This partially contributed to another finding that many wellness professionals either know or deny: the study found that there were not “significant causal effects of treatment on total medical expenditures, health behaviors, employee productivity, or self-reported health status in the first year.” This is a nice way of saying that the researchers found no evidence of return-on-investment (ROI) from traditional measures used by most employers. The study did suggest, however, that wellness programs could serve as “screening mechanisms” for differential recruitment and retention of lower cost employees, which could result in financial returns despite the absence of direct savings from the employee wellness programs.

The study also provided interesting data on the impact of financial incentives. The participation rate for the entire eligible population was 56%, but increasing the screening completion reward from $0 to $100 boosted the completion rate by 12 percentage points, from 47% to 59%, but further increasing the reward to $200 only increased completion by 4 percentage points, to 63%. This suggests that the diminishing impact of increasing wellness incentives will result in gains being realized to program participants, which tend to be middle-of-road healthcare spenders. The study also found that incentives tied to completing downstream wellness activities were more cost-effective than up-front incentives tied to completing the initial health screening. This is even more of a reason for employers to ditch biometric screenings and HRAs. 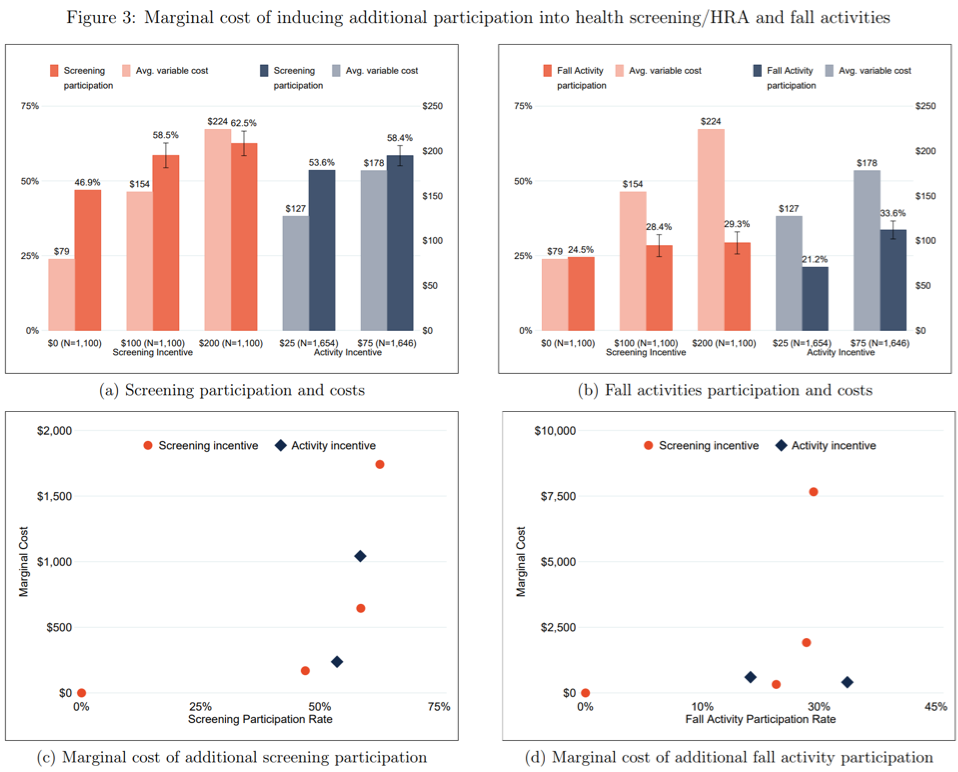 Illinois Workplace Wellness Study conducted at the University of Illinois at Urbana-Champaign designed and implemented a comprehensive workplace wellness program for a large employer with over 12,000 employees, and randomly assigned program eligibility and financial incentives at the individual level.  The analysis combined individual-level data from online surveys, university employment records, health insurance claims, campus gym visit records, and administrative records from a community running event.  The researchers noted that the study only examined outcomes in the first year following the start of the study, and it is possible that meaningful effects may emerge in later years.