Employers and health plans have long sought after a clear understanding of the benefits derived from engagement.  It is widely understood that engagement results in positive business outcomes for both types of entities; however, some would argue that too much engagement is a bad thing.

Regardless, few studies have been published that quantify the financial impact of engaging employees and members…until now.  A new report shows the value of consumer engagement in health plans. 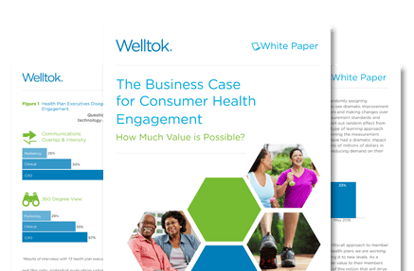 Through an analysis of 14 years of consumer health insights, more than a billion interactions with consumers, and an extensive amount of academic and industry research, the study revealed that health plans can generate significant short- and long-term value by engaging members in their health.  In fact, the report suggests that engaging healthcare consumers can be one of the highest value activities a health plan can undertake.

According to the analysis, health plans could potentially double their net income by engaging an additional 10% of consumers with their health.  “For example, a one million-member commercial health plan in the individual marketplace could produce over $130 million in new value by engaging just 10% more members.  This value is comprised of key medical and administrative cost reductions and revenue increases, resulting from an array of specific actions that consumers take in response to being more engaged.  The report also revealed an even higher value of engagement among Medicare Advantage ($302 per member per year) and Managed Medicaid ($157 per member per year) populations.”

The key takeaway is that small increases in engagement can have big impacts on financial outcomes.  The silver lining is that most employees and health plan members are woefully disengaged, which means the opportunity to achieve small increases in engagement are certainly attainable.  With 60% of human resource leaders viewing wellness as an engagement tool and health plans focusing on engaging members in wellness, technologies and solutions that can engage users effectively and affordably will be highly valuable to these entities.

It is also important to note that this analysis considers a broad range of benefits that result from engagement.  Traditionally, employers and health plans tried to constrict the gains from engagement through an analysis of hard savings, or return on investment (ROI), rather than considering all the benefits, often referred to as value on investment (VOI).  Employers are beginning to shift their perspective to VOI as noted by a survey suggesting the majority of employers now consider VOI.

Other Articles In "Employee Engagement”

Organizations must constantly evolve to survive. This is especially true during global crises...

A Psychological Perspective On Employee Engagement

Though employee engagement is often proclaimed to have a significant impact on outcomes like...