The Twos: Fitbit Launches The Flex 2 And Charge 2

Fitbit continues to expand their product line by announcing new versions of the Fitbit Flex and Fitbit Charge devices.  Since the Flex has been a staple of corporate wellness programs since it was released in 2013, the update maybe seen as long overdue for that device.  Below are brief highlights for each device.

Flex 2
According to a Fitbit blog post about the new device, the Fitbit Flex 2 is a “swim-proof” fitness wristband with a removable tracker that can track activity, exercise, and sleep.  The first ever “swim-proof” device removes any concern about getting it wet, which means it can track swimming.  The tracker is also 30% smaller than the original Flex and designed to be incorporated into more fashion-forward form factors, such as bands, bracelets, or pendants.  For example, Fitbit is selling stainless bangles that come in gold, rose gold, and silver that can discreetly hold the tracker.  With fashion concerns being an alleged cause of device adherence, the Flex 2 attacks the challenge head on. 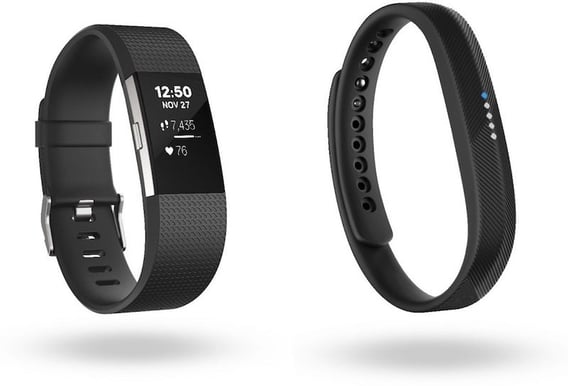 Charge 2
The Fitbit Charge 2 will track activity, heart rate, and sleep.  The sleep features include the ability to create a sleep schedule, complete with bedtime reminders and a silent vibrating alarm for gentle wake ups.  Similar to other devices, the Charge 2 also includes reminders to get active.  The display is four times larger than the device’s predecessor, the Charge HR.  It also allows users to receive notifications from their smartphone.  According to Fitbit, the Charge HR revolutionized the industry by bringing automatic heart rate tracking to the wrist, and now Charge 2 will take that technology to the next level with an “enhanced exercise experience and new health and fitness tools…, including Cardio Fitness Level and Relax.”  Cardio Fitness Level is an estimate VO2 max that calculated based on a user’s profile, heart rate, and exercise data.  Relax is a guided mindfulness feature that creates a personalized breathing experience to calm the body and mind.  The Charge 2 also includes Connected GPS, which allows the device to use the GPS in a paired smartphone to enhance tracking statistics.

Fitbit Adventures
Fitbit also announced a new app feature call Adventures, which is a series of personal, non-competitive immersive Challenges that encourage daily activity by virtually exploring scenic and iconic destinations.  Users can virtually explore a location, starting with three routes in Yosemite National Park, unlocking new landmarks as they take more steps.  The scenes are panoramic, which allows the user to "look around" by moving their phone.

Burnout Risk On The Rise As Employers Pivot To Remote Work

How To Combat Employee Isolation