Despite the popularity of standing desks in the office, there’s little evidence that workplace interventions like standing desks help individuals burn lots more calories or prevent or reverse the harm of sitting for hours on end.  However, a new study from Texas A&M Health Science Center School of Public Health suggests that standing desks could also boost productivity for some employees by a whopping 46%.

The study, which included employees at a call center for a pharmaceutical company over a six-month period, sought to measure productivity changes in said employees after the company purchased standing desks.  Prior to the intervention, employees spent most of their days sitting down while talking with clients on the phone about health issues.  After installing standing desks, their productivity was graded based on metrics such as whether they delivered pertinent information and whether callers decided to continue being clients. 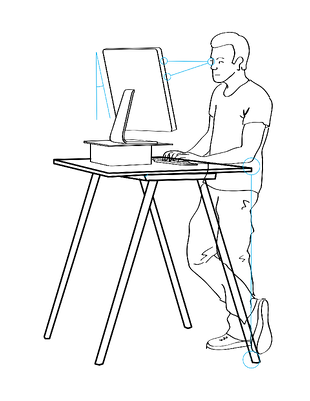 Within a month of getting standing desks, those employees were 23% more productive than their colleagues who continued to use traditional sitting desks.  Over the next five months, the boost in productivity rose to 53%, which may be because employees got accustomed to working while standing.  The average productivity increase over the entire half-year period was 46%.  In all fairness, some individuals have criticized the study, including Alan Hedge, professor of ergonomics at Cornell University.  He notes that the group of employees who did not receive a standing desk was less productive than the group who did, even at the beginning of the study.  If you take that difference into account, there was probably a productivity boost of only about 14% or 15% associated with a standing desk.  "That difference would be completely in line with the 20-year history of other studies," Hedge said.

Even critics like professor Hedge agree that the study is still an argument in favor of standing desks.  It just might not be as strong an argument as the data would make you think.  So should employers invest in standing desks?  The answer is still unclear.  The current research suggests that standing desks have little to no impact on health but do improve productivity.  The potential to see productivity gains should consider the type of work employees are doing.  Call center work (talking on the phone, etc.) is more conducive to a standing desk than other types of work.  Also, in highly competitive job markets, benefits like standing desk may mean the difference in a candidate accepting a job offer, which is why standing desks are so popular in Silicon Valley.  When making this decision, employers should definitely think beyond traditional return on investment measures (ROI) and start thinking about value on investment (VOI) that takes into consideration how benefit packages impact recruitment and retention as well as other outcomes in a company.

For companies that can’t find budget to outfit traditional desks with standing ones, there are plenty of low-tech ways to work more movement into your day without buying new equipment or furniture.  For example, encouraging employees to take micro-breaks in which they move around for a minute every 20 minutes.  Similar to standing desks, micro-breaks appear to increase productivity about 15%.  If an employer does upgrade to standing desks, they should make sure employees are using them with proper form.

72% of Workers Regret Changing Jobs During The Great Reshuffle

Much ink has been spilled over the dramatic rise in resignations during the pandemic. Often, the...

Is The Great Resignation Just A Great Reshuffle?

Economists and organizational leaders have become increasingly concerned with the persistent flood...