It is easy to think of wearable devices and their companion apps as a single user experience, but a report from Argus Insights suggests that the users of these devices don't see them that way.  Argus, which looks at consumer reviews and social data to analyze "mindshare", reports that the baseline level of consumer enjoyment (what Argus calls "delight') of companion apps is much lower than enjoyment of the hardware products.

This distinction between the user experiences of wearable devices and companion apps is most apparent in Fitbit and Jawbone UP.  Jawbone users are considerably happier with the app than with the device itself.  The opposite is true for Fitbit where users like the device much better than the app.  Garmin had the most extreme disconnect: its devices scored near the top, but its apps were the least delightful. 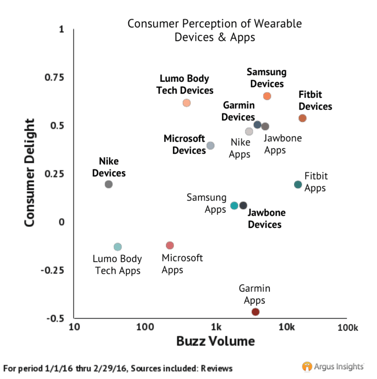 Argus Insights also looked into what's causing these impressions.  Features can cause an app's ranking to go up.  For example, the report cited Jawbone's SmartCoach and food tracking as popular.  Unreliable technology is what brings down favorability ratings the most.

The disparity in wearable devices and apps is further proof that employers should adopt a bring your own device (BYOD) wellness strategy.  Every user prefers to have a rich user experience with their device and app, and unfortunately, the current products in the market are not excelling at both.  As a result, user preferences on what matters more to them (hardware or software) likely has an impact on the device and app they want to use.  Every user’s unique preferences will result in unique choices for devices.  This is why employers should not commit to a single device or brand when launching a wellness program.