A new survey by Xerox and the National Business Group on Health (NBGH) demonstrates the  willingness of employers to invest in emerging technologies aimed at improving employee wellbeing despite challenges measuring impact and return on investment.  The biannual survey examines the current use and future potential of four key technologies: (i) gamification, (ii) mobile technologies, (iii) wearable sensors, and (iv) social media. 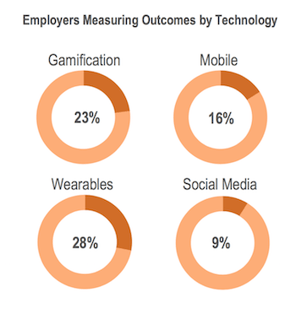 Employers were also surveyed on which technologies they were considering adding in next two to three years as well as which of the technologies noted in the survey were being used to measure outcomes.  The most popular technologies that employers said they may add were texting and wearable sensors for health monitoring – each were under consideration by about 40% of those employers surveyed.

From the Wellable perspective, it is becoming increasingly more difficult to make the distinction between the most popular wearable devices and mobile apps.  The most popular devices primarily track activity (steps), distance (miles), and/or sleep.  All of these functions can be done today through free mobile apps, which is great for employers trying to manage employee health on a budget.  Employers should not make the decision of what type of technology (app vs. wearable) an employee should use.  Rather, they should implement a multi-faceted bring-your-own-device (BYOD) wellness strategy.  This allows organizations to support both types of technologies in their program while allowing the employee to choose how to engage.  It is a win-win strategy.

It is important to note the type of employers that were involved in the survey.  More than 70% of the 210 employers participating in the survey were multinational organizations.  The median employer size was 10,000 to 24,999 employees and 17% had a workforce in excess of 100,000.